skip to main | skip to sidebar

The King is dead long live the Queen!

A day late and a dollar short as usual. But it was 60 years ago yesterday that god called to himself our late sovereign lord George VI of glorious memory. An excellent rendition of the coronation anthem is here, on YouTube.
Posted by adams at 10:39 PM 1 comment:

Kitsch: (adj.) The quality (in a work of art) of being good enough to have a recognizable subject and theme. Used by artists of lesser quality to describe the work of their artistic betters. Often used to denigrate a work who theme one disagrees with. Also used by those trying to pass off the work of third rate hacks as art. E.g. “You should really buy this Pollock not that Rockwell, the work of Norman Rockwell is kitsch.”
Posted by adams at 8:00 PM No comments:

Merry Christmass! See my past posts on New York at Christmass here, here, and here.
Posted by adams at 10:11 PM 5 comments: 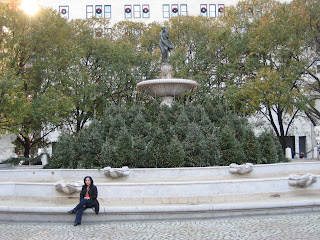 Christmas related thoughts soon this is just a test post.
Posted by adams at 4:39 PM 2 comments:

In Memory of the Dead

Eight years have passed since that horrible September day. Today we morn those so brutally murdered and those who have fallen in the defense of our people. May their friends and relatives finds comfort. As the good book says, the lord giveth and the lord taketh away, blessed be the name of the lord.
Posted by adams at 10:45 AM 2 comments:

Today is the 40th anniversary of the launch of Apollo 11, the first manned craft to reach the moon. In celebration of this human accomplishment, I am posting part of the late novelist and philosopher Ayn Rand’s account of the momentous event. I also want to acknowledge and celebrate the bravery of Neil Alden Armstrong, Michael Collins, and Buzz (formerly Edwin Eugene Jr.) Aldrin.

[The launch] “began with a large patch of bright, yellow-orange flame shooting sideways from under the base of the rocket. It looked like a normal kind of flame and I felt an instant’s shock of anxiety, as if this were a building on fire. In the next instant the flame and the rocket were hidden by such a sweep of dark red fire that the anxiety vanished: this was not part of any normal experience and could not be integrated with anything. The dark red fire parted into two gigantic wings, as if a hydrant were shooting streams of fire outward and up, toward the zenith—and between the two wings, against a pitch-black sky, the rocket rose slowly, so slowly that it seemed to hang still in the air, a pale cylinder with a blinding oval of white light at the bottom, like an upturned candle with its flame directed at the earth. Then I became aware that this was happening in total silence, because I heard the cries of birds winging frantically away from the flames. The rocket was rising faster, slanting a little, its tense white flame leaving a long, thin spiral of bluish smoke behind it. It had risen into the open blue sky, and the dark red fire had turned into enormous billows of brown smoke, when the sound reached us: it was a long, violent crack, not a rolling sound, but specifically a cracking, grinding sound, as if space were breaking apart, but it seemed irrelevant and unimportant, because it was a sound from the past and the rocket was long since speeding safely out of its reach—though it was strange to realize that only a few seconds had passed. I found myself waving to the rocket involuntarily, I heard people applauding and joined them, grasping our common motive; it was impossible to watch passively, one had to express, by some physical action, a feeling that was not triumph, but more: the feeling that that white object’s unobstructed streak of motion was the only thing that mattered in the universe.”

“What we had seen, in naked essentials—but in reality, not in a work of art—was the concretized abstraction of man's greatness.”

“The meaning of the sight lay in the fact that when those dark red wings of fire flared open, one knew that one was not looking at a normal occurrence, but at a cataclysm which, if unleashed by nature, would have wiped man out of existence—and one knew also that this cataclysm was planned, unleashed, and controlled by man, that this unimaginable power was ruled by his power and, obediently serving his purpose, was making way for a slender, rising craft. One knew that this spectacle was not the product of inanimate nature, like some aurora borealis, or of chance, or of luck, that it was unmistakably human—with ‘human,’ for once, meaning grandeur—that a purpose and a long, sustained, disciplined effort had gone to achieve this series of moments, and that man was succeeding, succeeding, succeeding! For once, if only for seven minutes, the worst among those who saw it had to feel—not ‘How small is man by the side of the Grand Canyon!’—but ‘How great is man and how safe is nature when he conquers it!’

“That we had seen a demonstration of man at his best, no one could doubt—this was the cause of the event’s attraction and of the stunned numbed state in which it left us. And no one could doubt that we had seen an achievement of man in his capacity as a rational being—an achievement of reason, of logic, of mathematics, of total dedication to the absolutism of reality.”
Posted by adams at 12:59 PM No comments:

George Reisman's Blog on Economics, Politics, Society, and Culture: GENERAL MOTORS, RIP
Posted by adams at 11:15 AM No comments: